Salt of the earth.

Before the town dump or transfer station, most homesteads had their own dump or midden. Because these piles of refuse are unsightly, they were usually hidden in a hollow, or behind a wall. Over the years food scraps, garden waste etc, mix with and bury the inorganic detritus. 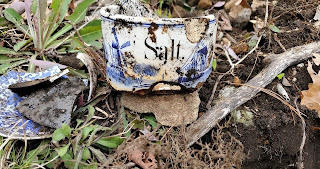 Many years later, when such walls need repairing, all this rubbish once again comes to light. One can only speculate as to how these fragments of a bygone life came to rest behind a wall for decades, possibly centuries. Does one take them home and preserve them, or place them back behind the wall to be found in a hundred years or more by the next wall repairer? 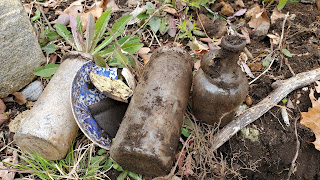 The clear glass bottle with the cap is from the Jacob Ruppert Brewing Co in NY, which closed in 1965. The green bottle is marked A.B.Co The bottle at the back of this group while of an older vintage is still pressed and not blown. 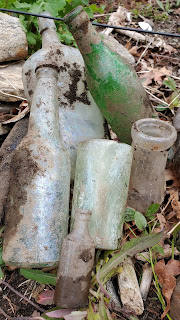 I remember repairing a wall on an old farmstead with a friend, in which we found a broken bottle. I commented that the bottle could have contained homemade cider or ginger beer brought to quench the wall builders thirst and then placed on an uneven stone from where it fell and broke.
No said my friend, probably just some kid who stole it from his father's beer supply, hid behind the wall and having drunk the contents smashed it into the wall. Either story could be true. My preference is the former.
Posted by Andrew Pighills at 4:37 PM