If you're looking for an exuberant display of color this coming June, to complement and contrast with your perennial mainstay, now is the time to sow your poppy seeds. Some people like to sow them while there is still a covering of snow, thus allowing for an even spread, as the tiny dark colored seeds show up well against the white snow.

The Shirley poppy, (papaver rhoeas) named after the town of Shirley, England, where the first strain was discovered in the early 1800's, will blend with most color schemes, even the purple allium does not look amiss. 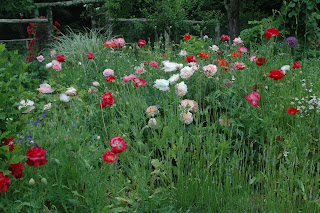 Even though the flowers are relatively short lived, the profusion of buds make for an extended flowering period. 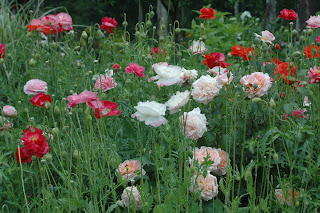 Honey bees prefer the Shirley poppies over most any flower in the garden. One look at the pollen covered stamens, and one can see why. 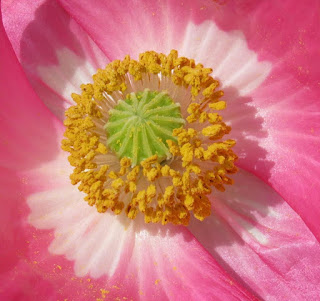 Posted by Andrew Pighills at 2:20 PM No comments: 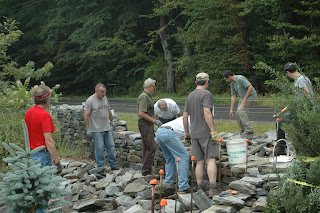 On Sept 29th and 30th 2018, Andrew Pighills, expert stone mason, will teach a two-day, weekend long workshop on the art of dry stone wall building at Stonewell Farm in Killingworth, CT.
Participants will learn the basic principles of wall building, from establishing foundations, to the methods of dry laid (sometimes called dry-stacked) construction and ‘hearting’ the wall. This hands-on workshop will address not only the structure and principles behind wall building but also the aesthetic considerations of balance and proportion.

You must pre-register to attend the workshop.

To register for the workshop please contact the Workshop Administrator and she will email a registration form:

SATURDAY LATE AFTERNOON ‘R & R’  EVENT!!!!
At the end of the day on Saturday you’ll be hungry, tired and ready for some rest and relaxation, so we fire up our wood-fired Stone pizza oven and serve beer, wine and Pizza Rustica. Fun and delicious! 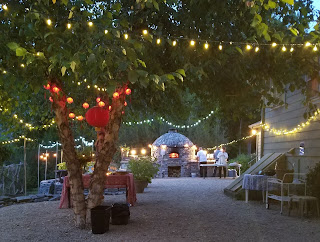 ABOUT THE INSTRUCTOR:  ANDREW  PIGHILLS 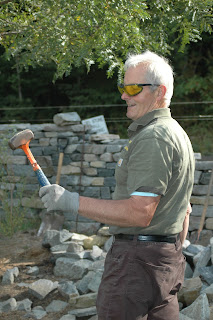 Born in Yorkshire, England, Andrew Pighills is an accomplished stone artisan, gardener and horticulturist. He received his formal horticulture training with The Royal Horticultural Society and has spent 40+ years creating gardens and building dry stone walls in his native England in and around the spectacular Yorkshire Dales and the English Lake District. Today, Andrew is one of a small, but ever expanding group of US-based, certified, professional members of The Dry Stone Walling Association of Great Britain. Having moved to the United States more than ten years ago, he now continues this venerable craft here in the US, building dry stone walls, stone structures and creating gardens throughout New England and beyond.
His particular technique of building walls adheres to the ancient methods of generations of dry stone wallers in his native Yorkshire Dales. Andrew’s commitment to preserving the integrity and endurance of this traditional building art has earned him a devoted list of private and public clients here and abroad including the English National Trust, the English National Parks, and the Duke of Devonshire estates. His stone work has been featured on British and American television, in Charles McCraven’s book The Stone Primer, and Jeffrey Matz’s Midcentury Houses Today, A study of residential modernism in New Canaan Connecticut. He has featured  in the N Y Times and Yankee magazine (3rd profile) on Martha Stewart Living radio, and in the Graham Deneen  film short  “Dry Stone”, as well as various media outlets both here and in the UK, including an article in the 2017 issue of  Southern New England Home.
Andrew is a DSWA fully qualified dry stone walling instructor. In addition to building in stone and creating gardens, Andrew teaches dry stone wall building workshops in and around New England. He is a frequent lecturer on the art of dry stone walling, and how traditional UK walling styles compare to those found in New England. His blog, Heave and Hoe; A Day in the Life of a Dry Stone Waller and Gardener, provides more information about Andrew.
www.englishgardensandlandscaping.com
www.heaveandhoe.blogspot.com
Posted by Andrew Pighills at 2:30 PM No comments:

Thursday 8th at 3pm Essex Meadows This presentation is not open to the public
Posted by Andrew Pighills at 1:56 PM No comments:

Email ThisBlogThis!Share to TwitterShare to FacebookShare to Pinterest
While I'm not suggesting you get out your garden tools just yet, or rush out and buy your annuals. My advice is, make sure your tools are clean and sharp, and your annual containers are clean and damage free, because the harbingers of spring are here. 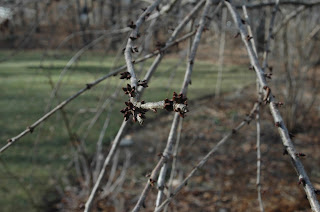 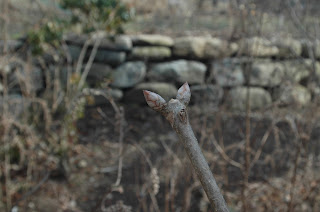 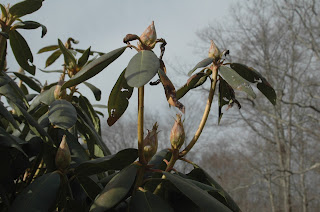 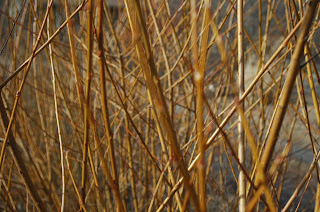 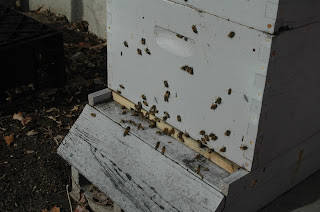 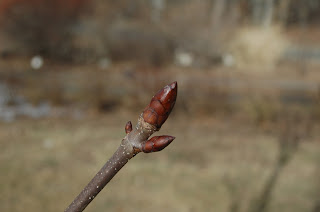