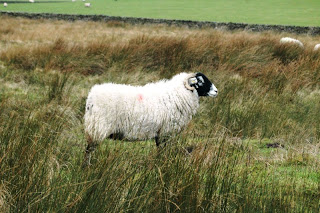 A traveller decided to write a book about famous houses of worship around the world.

He bought a plane ticket and took a trip to China.On his first day he was inside a temple, taking photographs, when he noticed a golden telephone mounted on the wall with a sign that read ‘$10,000 per call’.  Intrigued, the traveller asked a priest, who was strolling by, what the telephone was used for.
The priest replied that it was a direct line to Heaven and that for $10,000 you could talk to God personally.
He thanked the priest and went on his way. Next stop was in Japan. There, at a very temple, he saw the same golden telephone with the same sign under it. He wondered if this was the same kind of telephone he saw in China and he asked a nearby nun what its purpose was. She told him that it was a direct line to Heaven and that for $10,000 he could talk to God directly.
‘OK, thank you.‘ said the budding author.He then travelled to Pakistan, Sri Lanka, Russia, Germany and France. In every house of worship he saw the same golden telephone with the same ‘$10,000 per call’ sign under it. The traveller decided to visit the UK to see if the British had the same phone. He arrived in Yorkshire and again, in the first church he entered, there was the same golden telephone. But this time the sign under it read ’20 pence per call’. The traveller was surprised, so he asked the priest about the sign.
‘Father, I’ve travelled all over the world and I’ve seen this same golden telephone in many houses of worship. I’m told that it is a direct line Heaven. But everywhere I went the price was $10,000 per call. Why is it so cheap here?’
The priest smiled and answered, ‘you’re in Yorkshire now, son – it’s a local call’.

Posted by Andrew Pighills at 6:49 PM No comments:

We're moving along with the wood-fired oven, aka; pizza oven. Below are some photos of its progress:


Posted by Andrew Pighills at 11:53 AM No comments: 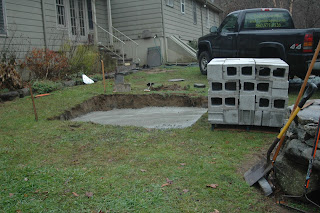 Today  is the day to build the base stand. Concrete block establishes the armature for the workings of the future oven and wood storage. 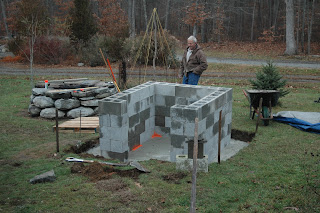 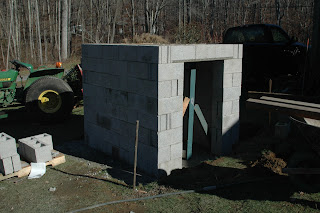 Posted by Andrew Pighills at 11:30 AM No comments: