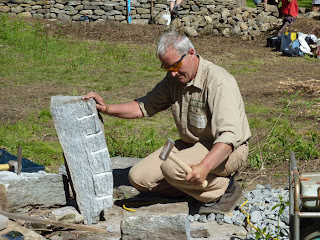 This morning at 8:00 am I appeared, or at least my voice did, on a live radio program  called Morning Living, a feature program of Martha Stewart Living Radio, XM Sirius satellite radio. This was quite a surprise and rather spur of the moment, as I received the call from the producer only yesterday afternoon asking if I'd be available to discuss the how-to's of drystone wall building, and if I could send them some information that would enable hosts Betsy Karetnick and Brian Kelsey to ask informed questions. Since we don't subscribe to satellite radio, I have no idea how it sounded. I've been promised a recording of the interview in a few weeks, and, if I'm able to secure the appropriate permissions to include it on this blog, I will do.
Posted by Andrew Pighills at 4:03 PM